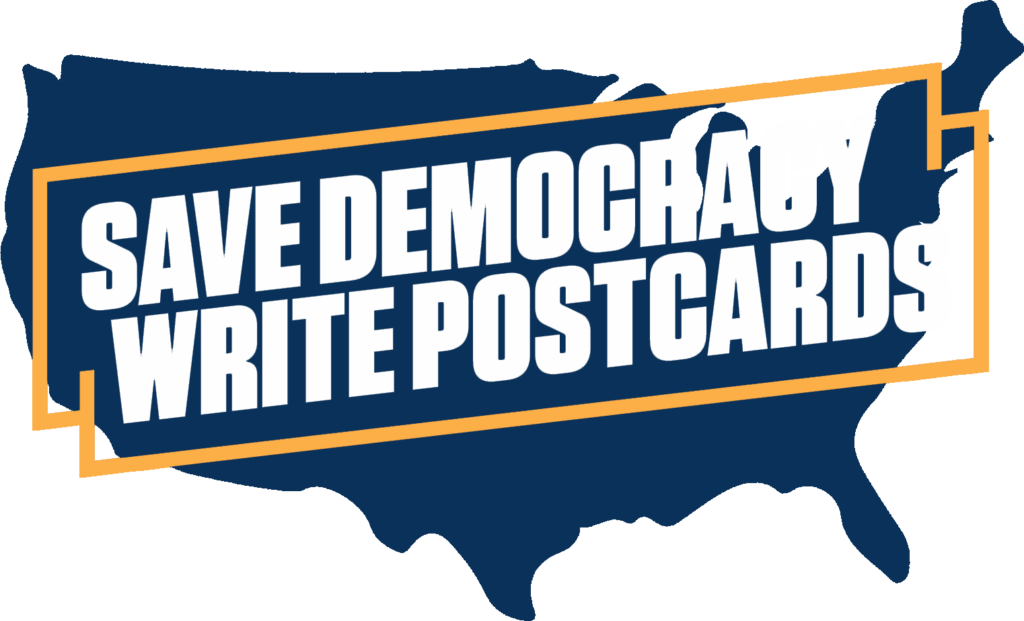 ← Back to Postcards home

If the following Frequently Asked Questions don’t answer your question, just email us at postcards@turnoutpac.org!

Why send postcards to voters?

Writing postcards to voters is a gateway to activism for hundreds of thousands of volunteers across the country. Postcards help grassroots groups recruit new members, build community, and win elections. Writing postcards is an especially great option for remote activism. They’re also fantastic for folks who have brief windows of time to help rather than blocks of a couple hours on weekends or evenings, when door-to-door canvassing shifts and phone banks are normally scheduled.

How do we know postcards work?

We’re data-driven and follow the best tactics shared within the progressive political science community through organizations such as the Analyst Institute. We explain our strategy in more detail in this blog post.

How does it work?

For most of our programs, we send you postcards, voter addresses and instructions for free. You provide Postcard Stamps and mail the cards to voters on the instructed date. The voter address sheets have 25 addresses per page.

Who are we sending these postcards to?

We use the latest predictive analytics to identify inconsistent Democratic voters. We send postcards to registered voters and rally them to turn out in races where our efforts are most likely to make the critical difference and elect Democrats.

What are our postcard programs in 2022?

Our first postcard program this year is focused on increasing Democratic turnout in the Pennsylvania primary election. We’re partnering with Anat Shenker-Osorio to test three messages. We’ll send a single round of  550,000 total postcards to that same number of Democratic voters. In addition to measuring how effective the messages are at rallying Democrats to vote in the primary, we’ll measure how many of them make voting a habit and also vote in November who wouldn’t have otherwise.

Right now the primary in Pennsylvania is scheduled for May 17, but it may move back because of delays with redistricting. We’ll start this program in either February or possibly March once we know for sure the date of the primary. We will provide free postcards to volunteers, and we expect this program to sell out quickly.

Our second postcard program this year is to highlight what Democrats have delivered so voters understand that progress has been made and are motivated to vote this fall.  Sign ups for this program will start in March and continue through April. You can send these as you write them or whenever you’d like. We’ll set a deadline of May. We’ll send up to 4 million postcards to voters in states with key Senate races: Arizona, Georgia, New Hampshire and Nevada. Volunteers will be responsible for providing generic postcards for this program. We will email voter addresses and instructions with the script.

We may add additional postcard programs, including for competitive House races, later in the year.

What other volunteer programs do we offer?

In the 2021 Virginia primary election, we successfully piloted a new program called Neighborhood Letters, which we plan to offer in several states with key Senate elections starting this summer.

In the Neighborhood Letters program, volunteers personalize and print copies of a letter from them to neighbors and then drop those letters off at the doors of neighbors who are on a list that we provide. We email each volunteer a letter template, instructions, and a list of between 50 and 100 Democratic neighbors in their own neighborhood. The volunteer prints the letters at home after adding a personal touch. Then, the volunteer leaves these letters, which encourage their neighbors to vote, at the doors of the Democratic neighbors on the provided list ahead of the election. Volunteers can also opt to mail the letters, but they’ll need to provide the envelopes and Forever Stamps.

In our Virginia pilot, Neighborhood Letters increased turnout by 1.1% among recipients and by 0.6% among other registered voters in the same households.

How do we pick the states for our postcard campaigns?

Electing Democrats and advocating for progressive policies are important at the federal, state, and local levels. Our programs usually focus on increasing Democratic turnout in federal elections where our programs are most likely to make the critical difference and help elect Democrats. In 2022, our focus will be on states with key Senate elections, and we will consider competitive House races across the country, as well.

You are responsible for providing the stamps. Remember to buy Postcard Stamps, which are less expensive than Forever Stamps for envelopes. Postcard Stamps can be used to mail a postcard forever, regardless of the current price. Right now Postcard Stamps cost $0.40. The easiest way to get stamps is online at USPS.com/store, but keep in mind it can take up to two weeks for them to deliver. You can also buy Postcard Stamps at your local post office. You can also use stamps with specific monetary values, as long as they add up to at least $0.40. Stamps go in the top right-hand corner on the blank side of the postcard.

Can I help if I can’t write 200 postcards or provide that many stamps?

Absolutely. The sign-up form starts at 200 because it’s much more economical for us to ship at least that many, but we want to accommodate anyone who wants to help, regardless of capacity or finances. First, please try to recruit people you know or a local grassroots group to join together for a bulk order and pooling for a stamp budget. But if that’s not possible, just email us at postcards@turnoutpac.org.

How do I mail the postcards?

Mail them loose and unsorted rather than in rubber bands. Either drop them in a collection bin or at the post office.

Should we mail them from the destination states?

Please mail them from wherever you are. Multiple studies confirm that postcards increase turnout regardless of where they’re mailed from, and most people don’t look at the postmark anyway!

How do postcards compare to canvassing, phone banking and letters?

All voter mobilization tactics are worthwhile. The effect of various types of voter contact are all relatively similar, and it very much depends on the quality of the program, its goals, and what you choose to measure. We provide a more detailed answer to this question in this blog post.

We very carefully plan when to have volunteers mail the postcards, based on a program’s goals, data on when they’re most effective, and actual USPS delivery times.

For most of our programs, we send each voter two postcards. One is timed to arrive at the best opportunity to promote early and mail-in voting, while the second is aimed at increasing Election Day turnout for those who didn’t opt to vote early or by mail. It’s important to follow our mailing date guidance! When postcards arrive too soon, they’re far less effective.

We closely monitor USPS delivery times to make sure our postcards will arrive at voters’ homes when they are most effective. Over 80% of first-class mail delivers in 1-3 business days, and over 95% arrives within 5-6 days. Our last mailing date is usually set for 7-10 business days before Election Day. While a tiny percentage of postcards take longer, sending them earlier to guarantee no postcard arrives after the election would reduce the effectiveness of our program and result in fewer Democratic votes.

Postcards to Swing States is a Progressive Turnout Project initiative. Our postcard program started in a volunteer’s garage in December 2019. In just two years, our volunteers in all 50 states have sent 29 million handwritten messages to voters, more than any other organization. Progressive Turnout Project is the largest voter contact organization in the country, specifically dedicated to mobilizing the Democratic Party and defending democracy. Our mission: rally Democrats to vote.

Are there other volunteer opportunities?

Yes! Check out all our volunteer opportunities on Mobilize.

Paid for by Progressive Turnout Project (www.turnoutpac.org) and not authorized by any candidate or candidate's committee.